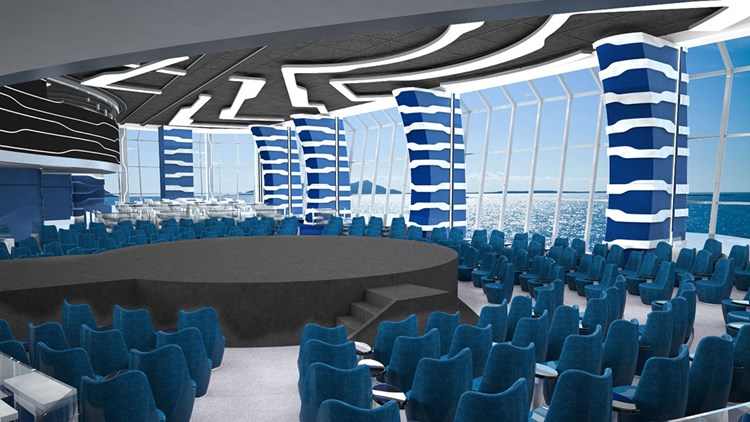 MSC Cruises has partnered with Cirque du Soleil to create shows on four of its new ships, which will be exclusive to MSC and debut on its Meraviglia-class vessels starting in 2017.

The shows will be staged in a custom-built theater that will be co-designed by the acrobatic theater troupe.

“What I’ve been told by Cirque du Soleil itself is that this is the first time that they have had this type of agreement with any cruise line or cruise organization,” Onorato said.

Under a previous partnership, Celebrity Cruises in 2004 transformed bars on two of its ships to serve as venues for Cirque artists who interacted with guests accompanied by special effects, visual projections, music and ambient sounds.  But the program was put on hiatus in its second year and eventually disappeared.

While the MSC shows have yet to be designed, they will be in the typical Cirque style adapted for the conditions of a cruise ship, Onorato said.

MSC plans to invest $20 million to develop the theater space for its Meraviglia class, which encompasses four ship deliveries from 2017-22. Preliminary designs are for a two-story, 450-seat space that will seat about 200 for a pre-show dinner. Another 250 seats are for spectators who can order drinks.

Onorato said the dinners will be as stylish as the shows, and food will be served “with spectacular interventions of artists.”

Renderings of the theater show an aft lounge close to the water with dramatic high window views.

Prices will include a dinner package and a cover charge for those not dining.

The 4,500-passenger MSC Meraviglia, the initial ship in the class, will debut in June 2017 in the Mediterranean, followed by three similar vessels. Cirque will create a pair of new shows for each ship. Performances are planned for six nights a week, with two shows a night.

Onorato unveiled the Cirque partnership in Barcelona aboard the MSC Fantasia at an annual gathering of 1,800 top trade performers from 150 countries.

Formed in Quebec in 1984, Cirque originated a dreamy, acrobatic style of entertainment that is now widely copied.

Cirque has three resident companies in Las Vegas, Orlando and in Mexico’s Rivera Maya. It also has touring companies that visit many cities.

Cirque has eight shows in Las Vegas, including “O” at the Bellagio, Kà at the MGM Grand and Zumanity at the New York-New York Hotel.

Vicky Garcia, chief operating officer of the Cruise Planners agency franchise, said the Cirque name is associated with quality by many consumers. “Cirque du Soleil has an affluent feeling,” she said. “It demands higher pricing.”

Onorato declined to comment specifically on the cost of the deal with Cirque but said, “This is a multimillion-dollar investment which we feel will highly reward the MSC brand all over the world.”

MSC has 12 ships with seven more on order. The MSC Divina recently returned to Miami for regular Caribbean cruises.