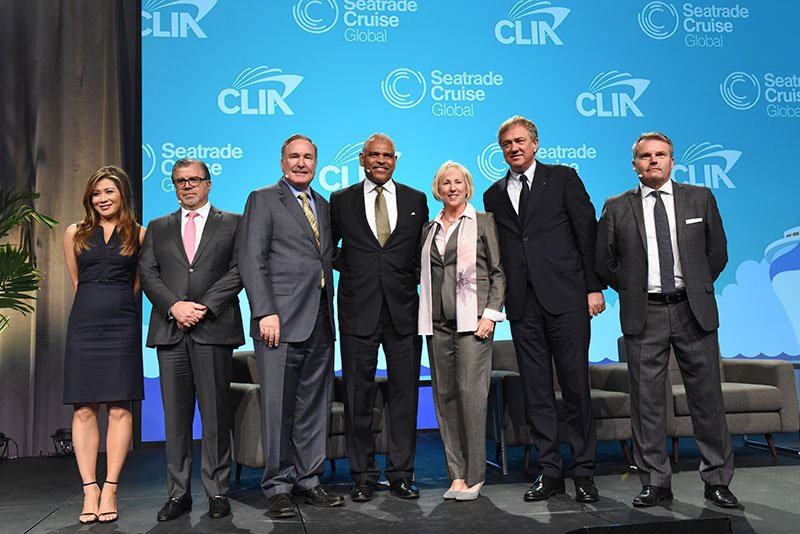 A strong economy and stock market, novel and appealing ships, a better understanding by the public of what cruising is all about and a calm geopolitical environment are fueling record cruise sales, they said.

"For a long time we've been expecting this," said Richard Fain, chairman and CEO of Royal Caribbean Cruises Ltd. "All of a sudden the understanding of the cruise offering has really taken hold. We're seeing in the U.S. tremendous consumer confidence, but we're seeing it in Europe as well and Asia is exploding."

Frank Del Rio, CEO of Norwegian Cruise Line Holdings, cited "the Trump effect" seen in the financial markets since the presidential election. "The stock market is at an all-time high," he noted.

Arnold Donald, president and CEO of Carnival Corp., said cruises tend to do fine irrespective of the economy. He said the industry's new products are attracting favorable notice. "We're growing. It's creating consumer demand every day."

"I agree, we're getting momentum," said MSC Cruises executive chairman Pierfrancesco Vago. "We've never seen so many [ship] orders placed so far in advance." He nevertheless said the industry should have the "capability and humility" to pay attention to details and not get carried away with its success.

Asked what keeps him up at night, Donald cited things such as the recent government instructions to Chinese travel agents not to sell travel to Korea.

"The only thing that really stops our industry is people's inability to travel. Just the mood in the world, the nationalism in so many places. As long as the world stays open to travel, we're going to do fine. But if the world just shifts to a place of closed borders [and] you can't travel, then we have a problem," Arnold said.

Del Rio concurred. "I wake up every day hoping there's no headline news," he said.

Vago said that even after a geopolitical flare-up, the cruise lines fare better than travel in general. "Cruise is somehow the platform where customers feel very comfortable to explore the world, to travel the world," Vago said.

Fain said the only reason to lose sleep is a positive one. "Maybe it's excitement, because the industry really does seem to have found a groove. We've done a better job of communicating what cruises are all about," he said.

He said that he worries about the unforeseen happening, about adverse government action, but that the general tone of things is the most positive he can remember. "So I'm actually sleeping pretty well these days."